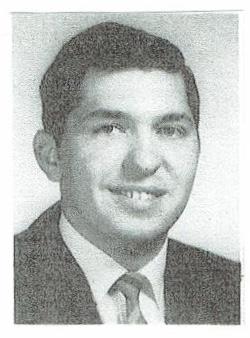 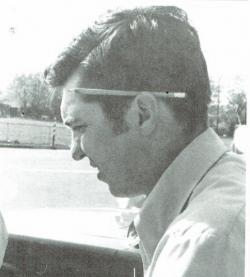 Leonard during the 1971 campaign for City Council.

Leonard E. Stubbs moved to Centerville to be a social studies teacher at the high school. He dreamed of making a difference. Not only did he connect to and influence many students, he also left his mark on our community during his short life, including a park named in his honor.

Leonard was born in 1941 in Michigan. He attended Lincoln Park High School. He missed a year of formal schooling due to a serious bout of scarlet fever. After graduation in 1959, he headed to Wayne State University in Detroit where he earned his undergraduate degree. Additionally, he served in the military. He eventually received a masters in administration at the University of Dayton.

By 1969, he taught American and current history at Centerville High School. He taught in the Magsig building and the “new” high school building once it was completed in 1974. He accepted additional responsibilities as freshman class advisor in 1976 and took his turn as department head in 1978. He was well liked among his students and co-workers. In 1980, he taught classes in government as well as an elective, Living in America. Leonard participated in a fellowship group of Christian teachers.

His illustrious career did not stop there. He ran for City Council and lost. The next year, he applied when a seat became open. Eventually with the help of Mr. Jim Tule, his campaign manager, and a group of students who surveyed residents and made signs, he was elected to Council on November 9, 1971. Four candidates were vying for three empty seats. It was unusual for a teacher to run for a local government office. He earned respect and votes by walking door to door, meeting residents. His promise to the community? Make Centerville a better city during his term of service.

Leonard served on Council from 1972 until 1981. He was credited with bringing the Chevy Chase development to Centerville. He was also instrumental in creating interest in the City’s bike paths. He was quiet but open with his political opinions. He took strong positions on issues but was never offensive. He had aspirations to move into state government. Always a teacher, he shared his passion for service and local government with his students.

His interactions were known as positive. He showed camaraderie in the work place and was known as a “great guy.” He loved the community and wanted to see Centerville thrive.

Leonard enjoyed softball, gardening, and tennis. Most importantly, he loved his family. He and wife Shirley raised three children: Susanna, Nathan, and Matthew. Leonard was a man of faith as well as a dedicated family man. The family attended Washington Heights Baptist Church. They made their home in the Pleasant Hill neighborhood at 440 Sunnycliff Place.

The City acquired land for a new park on Spring Valley Road while Leonard was on Council. The proposed name was Benjamin Archer Park, out of respect for one of our City co-founders.

Sadly, on Feb. 12, 1981, Leonard died from cancer. He was buried in Springboro’s Miami Valley Memory Gardens. He was only 39 years old.

The new land was dedicated in 1982, but not as Benjamin Archer Park. It is forever known as Stubbs Park in memory of a hardworking, dedicated teacher and Councilman.