The corner fireplace on the ground floor of the house. 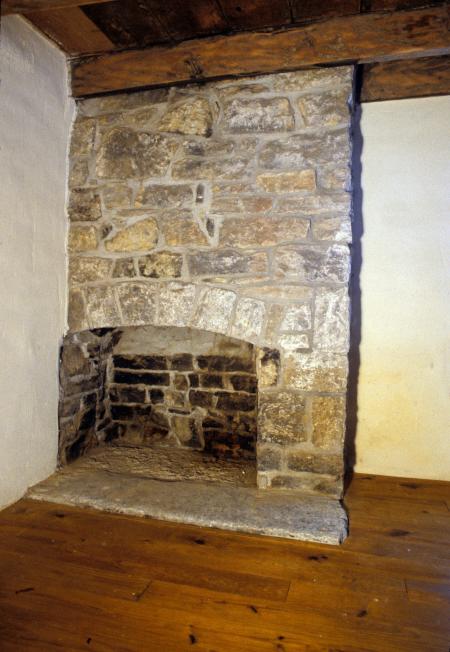 The Asahel Wright house chimney as seen from the back is off-set from the corner fireplace.

One day last month while checking e-mail my eye was caught by a pop-up article titled “Largest hoard of Anglo-Saxon treasure found in UK.”  The article announced the discovery of Anglo-Saxon “war loot.”

In the 5th and 6th centuries, Germanic Anglo-Saxon tribes settled in what would later become England and controlled the country until 1066.  Yet not much is known about these tribes because little evidence of their culture has been found.  Thus, archeologists are very excited about this treasure trove, which has been likened to “Tutankhamen’s tomb.”

The treasure site is expected to yield around 1500 artifacts.  While some of the objects recovered are easily identifiable, many items have the experts stumped:  “There’s lots of mystery in it,” said the site manager.

But these now-mysterious items were once commonplace.  The Anglo-Saxons were no doubt as familiar with them as we are with cell phones and computers.  Unfortunately, that knowledge has been lost over the centuries.  Experts must now study the once-familiar Anglo-Saxon objects and solve the mystery of their function.

We had a similar - though less momentous - mystery to solve in the Asahel Wright House.  The Asahel Wright House (circa 1806) was probably built by Aaron Nutt, one of our founding fathers and purchased by Asahel Wright.  One of the most interesting features of the House is its fireplace.  The large limestone fireplace is unique in our area because it is situated in a corner rather than being centered on a wall.

The expansion theory was plausible.  However, it was called into question several months ago when in our files I found a 2003 newspaper article on the Asahel Wright House.  In the article, Tom Williamson of the Historical Society referred to the House as “. . . the only one of its era and type to have a corner fireplace like those seen in Welsh domiciles.”

Williamson’s comment prompted me to Google “Welsh fireplace.”  Search results revealed that the corner fireplace was characteristic of Welsh construction and that corner chimneys were commonly seen in the South.  The presence of a rare Welsh corner fireplace in Centerville is apparently a reflection of the Welsh ancestry of some of our early settlers.