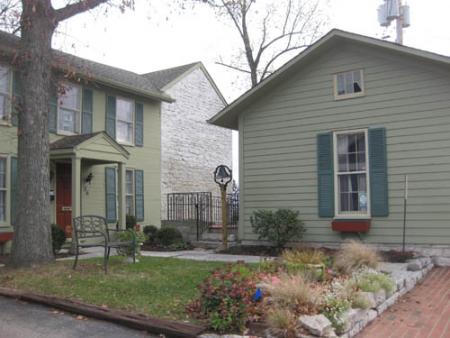 The Asahel Wright Museum (left) and School Museum (right) is open Tuesday through Friday from 12 noon until 4:00 p.m. 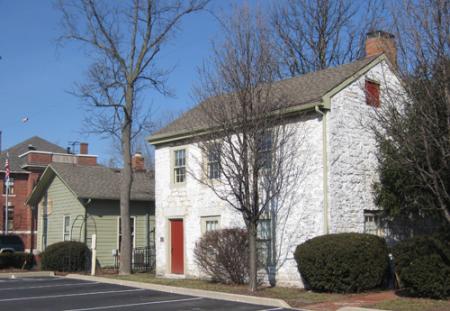 Today, the Asahel Wright House is operated as a museum by Centerville-Washington History.

The Asahel Wright Museum began as the Asahel Wright Community Center and was a project conceived and created by a partnership of the Centerville-Washington Township Historical Society, the Centerville Arts Commission, the Landmarks Foundation of Centerville-Washington Township and the City of Centerville. The 1999 renovation and refurbishment of the buildings was funded by the city and included a great deal of volunteer labor from all groups involved. The Historical Society operated a visitors center and gift shop in the small frame building in front 1999 to 2011.  There are two exhibit rooms on the main floor.  Upstairs is office space for the Historical Society and its Education and Programs staff.  More can be learned about this house in our Walking Tour section of the web site.

The Asahel Wright House is a 1806 two-story stone house with a two-story frame addition built on in about 1860.  This house features trapezoidal shaped lintels over the door and the two first floor windows on the façade sets this building apart from other early stone houses.  The placement of the fireplace in the northeast corner of the house is also unique in our area.  The chimney crosses over to the center of the wall upstairs.  And the front door placed to the left makes this a Three-Quarters house, most in the area having centered front doors.  In about 1860, a two-story frame section was added on to this stone house.

Family records tell us that Aaron Nutt platted this block in 1805 or 1806 and that the house was built at that time.  A plat map recorded in 1817 lists E. Williams as the owner of the south half of Lot 3.  The sale was probably an informal sale as he is not listed as ever holding a deed for that property. The house is designated as the Asahel Wright house as the first official deed holder, but the building was probably ten years old when Asahel Wright purchased it.  Asahel Wright, a great-uncle of Wilbur and Orville Wright, purchased the property on August 16, 1816.  In 1978, the City of Centerville acquired the buildings and rented them for a dollar a year to the International Women's Air and Space Museum after the building was restored and renovated.  After the museum moved to the Cleveland airport, the building opened in October 1999 as offices and a museum run by the Historical Society.

Other early owners of the property include Hugh Alexander in 1826. In 1828, Leonard Ream, a skilled hat maker and deputy sherrif in Montgomery County, purchased the property. In 1836, the entire property is owned by James Harris, a pork packer, grocerer, and large property investor in Centerville. In 1860, James Harris added the two-story wooden addition to the house. Tax records reflect other improvements on the land occured during this time as well. The second story of the stone house had been added previously. From 1866 through 1892 the property was owned by James H. Hillan, grocer and hotelier.

Records suggest the small frame building by the sidewalk was added prior to 1860. However, the origins are unclear as local sources speculate that James Hillan built the structure. It's possible that one building replaced another or the building was significantly changed. Previously used as a gift shop and visitors center, Centerville-Washington History now uses the building as a one-room schoolhouse museum; filled with school desks, artifacts, and an array of photographs of our historic nine one-room schools.  School is in session during the Summer Youth Workshops and for school tours.   The museum is open Tuesday through Friday from 12 noon until 4:00 p.m.