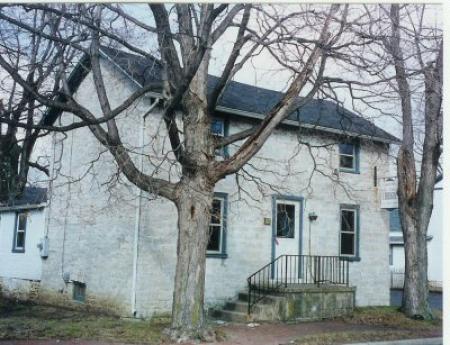 This building is currently owned by Cross Pointe Church.

Date:  The limestone house was erected when the platted lot was divided in 1835.

Features:  This house has a three bay façade with a centered recessed doorway.  The windows are 2/2 D.H.S. with stone lintels and wooden sills.  Cellar windows on façade.  Cellar entry is on the west side of the building from the outside.  A 36" long rectangular stone is lintel for the cellar entrance.  An interior chimney is located on the north gable end.  Both gable ends are unpierced.  There is a one story addition to the rear.  There is full length paneling on the interior (first floor of limestone dwelling) of a window and doorway.

The tax records for Montgomery County show this land was part of the Aaron Nutt plat.  It was first sold in 1814, but from those same records we believe the house was not built until about 1835.  At that time James McKinney was the owner, with his wife, Malinda.    James was a tailor, and we wonder if he had his business in his home, since it was so close to the center of town.  He didn’t own the house very long, however, as the records show it was sold in 1838 to James Harris.  During the next eighty-four years the house was bought and sold many times, but in the1920’s the Scheidt family moved in and stayed for fifty years.  Luckily, our records here, include the memories of their daughter.  She relates that additions were added to the house and the front entrance was changed in later years, but originally the house contained 1 bedroom downstairs and 2 bedrooms up.   Her father, Fred Scheidt, worked in the stone quarries for many years, until 1920.  He then worked as the caretaker for the cemetery, further north on Maple Avenue.  The family was large, with four boys and five girls.  They raised most of the food they needed in the large garden at the back of the house. Their mother, Mary, canned much of it and stored it in the cellar, which had to be reached from outside.  Water was obtained from a well and a cistern collected the rain water.  The house was heated with a coal stove.  Oil lamps were used inside the home until about 1960 when electricity was installed.

Although the home sounds rather primitive, it furnished the children with many happy memories and a snug environment.  Today we can see the two-story limestone structure still standing behind the church parking lot, where it formerly served as a church library, and if you stop by the cemetery you can see the resting place for Fred and Mary.

Owners:  James McKinney was a tailor.  The building was subject to a sheriff's sale in 1857.  It served as the parsonage for the Centerville Methodist Church 1858-1865.  It is now the property of the Cross Point Church and has been used as a library for the Centerville Bible College.

Other:  A township indenture indicates that James Davidson Scott (17 years old) is "to learn the art or trade of tayloring."  McKinney was "to board and lodge him in a comfortable manner, to find good, comfortable wearing apperel such as an apprentice generally wares, to teach him the sistem of cutting that is the theory of said McKinney."