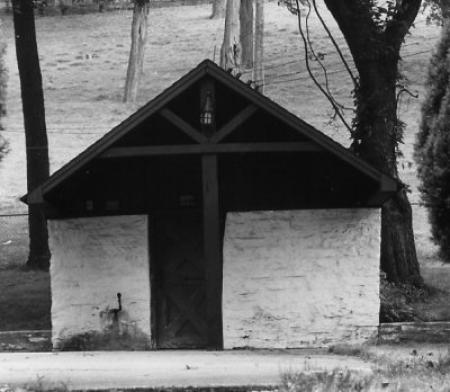 Features:  Two limestone springhouses are located on the hillside along Mad River Road.  Both springhouses are built of highly fossiliferous Ordovician limestone 18 inches thick.  The larger springhouse to the south (the upper photograph) has a front door that is set left of center.  The gable end is at the front of the building and the triangle over the doorway is of wood.  In the opposite gable end is the only window, four panes, in the springhouse, 29 1/2" x 26."  The roof overhangs the doorway by 103 inches.  Inside, there is no ridge pole.  The rafters are nailed at the top and the floor is of concrete.

The smaller springhouse to the north (the lower photograph) has been considerably changed.  The doorway is centered on the front with the framing for the door cut from a single piece of wood on each side.  Opposite the doorway inside is a 32" deep rectangular holding area filled with spring water, probably used for storage of dairy products.  The rafters are straight-sawn 6" x 2" with pine boards as a roof.  On the front of the building are glacial erratics including quartzite, garnet, garnet gneiss and gneiss with mica.  These stones appear to have been added, perhaps one or two inches in thickness.  The rest of the stone appears to be original, a darker gray color indicating it is Ordovician rock.  Horn corals and brachiopods are among the fossils quite visible.

Owners:  Dr. John Hole, the first physician in Cincinnati and Montgomery County, built a log cabin for his family near this springhouse in the summer of 1796.  He had fought in the Revolutionary War as the personal physician and surgeon for Brigadier General Richard Montgomery.

Other:  These two springhouses are located on a hillside where Hole's cabin and later, his two-story log mansion were built.  In the 1920s the log mansion was demolished and a two-story frame home built at the apex of the hill.