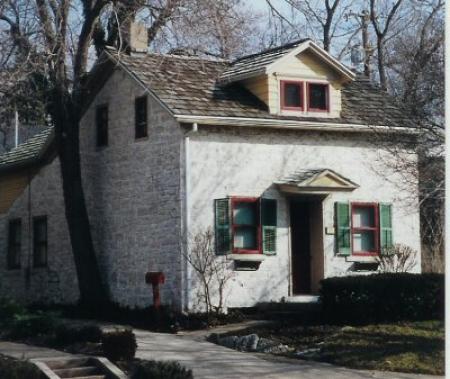 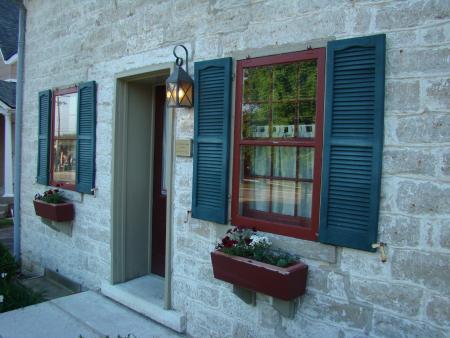 Today, the Nutt Cottage Research Center is the location of records, artifacts and library for Centerville-Washington History.

The house is 20 feet wide by 31 feet long and made from hand-hewn stone; Centerville's abundant natural resource, Niagara limestone or sometimes referred to as Dayton limestone.  This time I would like to tell you about our Historical Society's own property, which is constructed of that very dense limestone and was beautifully restored by Centerville-Washington History volunteers in 2003.

The report states, "The stonework on the façade is nicely coursed with long and short stones alternating."  It was built with walls which are 20 inches thick.  The stones are placed back to back with a smooth "dressed" stone on the outside and a rough stone on the inside.  The chips from the dressed stones are placed between for insulation.  The windows in the original part of the house are 6 over 6.  That is, six panes on top and six on the lower part of each window.  Although records are sketchy from the early 1800s, we believe the windows are original and we know they are mounted outside on solid stone sills, pegged at each corner.

Inside the original front room, we can see decorative moldings framing the windows and making a cupboard next to the area where the fireplace was found.  The latter was on an end wall, and even though the fireplace had fallen into disrepair we can see from the outside chimney where it had been.  Next to that we believe there was tight-winder staircase to lead to the one bedroom upstairs.  One of our references, "How Old Is This House" by Hugh Howard, notes that the kitchen or storage space was usually in an addition behind the main room, "resulting in the characteristic shape known as a saltbox."

In the area which at one time would have been the outside of the house, we have a trapdoor leading to a stone cellar.  The steps going down to the cellar floor are all stone and the bottom steps are hewn from solid limestone.  Probably in Victorian times a porch was built above the cellar, but it was later sided with wood to form a kitchen.  Our records vary on when the rear additions were added but we estimate in the 1930s or 40s.  At that time, a second upstairs bedroom was added and the rear limestone wall was removed.  Also upstairs, we can see batten doors on the closets with rectangular cut nail heads.  Those date from the mid-1800s.  Altogether, the cottage has been a charming home for many families through these 200 years.

Features: This house is a three bay saltbox design with a centered front door. 1/1 D.H.S.  All the original windows are pegged at each corner.  A centered dormer with two windows and a pedimented hood added over front door, perhaps in the 1940s. This house represents the only limestone building in the area in a saltbox design.  The walls are 20 inches thick with raised mortar on the exterior.  The stonework on the façade is nicely coursed with long and short stones alternating while the gable ends are haphazardly coursed.  The limestone part of the house consists of two rooms downstairs with a sleeping loft above.  Both rooms downstairs represent the way carpenters built many of our early houses: the hypotenuse of the building is an even number of yards or half yards.  The hypotenuse of the front room is 9 yards while the measurement on the back room is 8 yards.  In Victorian times a porch was added to south side, and later sided to become the kitchen.  The rear limestone wall was removed in the 1940s and additions made to the rear.

Owners: The cottage was built on land granted to Aaron Nutt by President James Monroe for Aaron's contributions in the Revolutionary War. This building is located within a 63-acre farm which Aaron Nutt sold in 1813 to his son-in-law, John Beck. It is part of a two-acre lot which John Beck sold in 1818 for $300, indicating the house was on the property by that time.  Rosetta Norris, whose sons were stonemasons, owned the house from 1831 to 1858.

Other: Today as many of you know, the Aaron Nutt, Sr. house is owned by Centerville-Washington History and is our Research and Archive Center. Our permanent collections are housed here, as well as genealogy and Landmark files.  Tom Williamson, Adam Zengel, Dave Hufnagle, and Dave Brooker, on a volunteer basis, were responsible for the restoration of this stone house.   Beginning in July 2003 and with the help of other volunteers, they cleared the land, stabilized the north wall which was bulging, removed the 1950s chimney and fireplace from the den and repaired the foundation.  They removed the hood over the front door.  The wall between the kitchen and den was removed to create one large room.  They reconstructed the bathroom.  They rewired and added a sump pump.  Matt Williams of Troop 516 repaired the garage as his Eagle Scout project.  In November 2004, we moved the collections and the office of the curator into the Nutt Cottage.