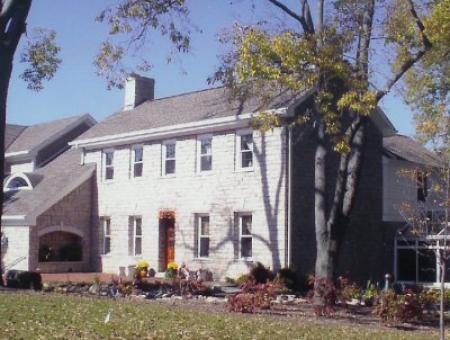 Date:  The house was probably erected around 1820.

Features:  This is an early limestone farmhouse with a five-bay façade.  Recently new stonework has restored the original divisions of the windows on the lower façade.  Keystone arches with radiating voussoirs highlight these lower windows.  The upper windows are plain.  The front door is centered and the upper east gable end is pierced with a small window on either side of the chimney.  There are interior stone chimneys in both gable ends.  A one-story section to the south, forming an ell with the main house, may have been an earlier building.  A window on the east side of this section was originally a doorway.  Large bark-covered logs serve as joists under this part of the house.  Hand-hewn joists support the two-story section.  There was a large fireplace on the south side of this room until the 1940s.  Two fireplaces remain in the downstairs, one in the bedroom upstairs to the east.  Recently the original paneling around the windows upstairs was uncovered.

Owners:  William Sunderland, father of Peter, purchased 338 acres, a half section of land, from John Cleves Symmes as early as 1798.  Two homes were built on this acreage and each had an early section that could have represented this early settlement.  The stone section to the north, reached by stepping down into the room, may have preceded the two-story stone section.  Feisty Peter Sunderland was found guilty of assault and battery in the first case tried in the Montgomery County Court in 1803.   He served in the War of 1812.  In the 1940s, the owner of the then 88-acre farm removed the garage, log building, and Victorian gingerbread porch, and replaced them with a two-story garage with upper living quarters for the help.  The pond for the spring was dug out and made into a cement swimming pool and a circular driveway installed.  The tobacco barn was made into a stable used by the owner to raise thoroughbred horses.  In recent years all the vestiges of farm life were removed, the additions were removed and the house restored.  An addition to the west of the limestone house was added in 2001 to serve as a home for the owner of the property and the technical school which sits on the front of the property.

Other:  In 1826, this home harbored a runaway slave, "Black John."  Word of the slave's presence reached Kentucky and a group came to reclaim John.  Peter threatened one of them with a corn cutter, shouting to Black John to escape.  John headed into the nearby woods and was not heard from again.