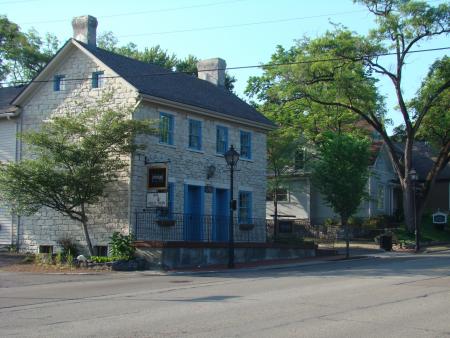 This building is a private business...

Date: The original stone section facing the street dates to 1832.  Although the primary entrance is on the south side, the two front doors were restored in the early 1980s to make it more like the original appearance.  A two-story frame addition was added to the rear in mid-19th century.

The deed for the property on Lot #6 of Aaron Nutt’s land was first registered in the Montgomery County Court in 1828.   Those records show the owner as Daniel McNeil.   In 1831, he sold the site to Andrew Vincent, who constructed the beautiful two-story limestone building we now can see.  By 1837 however, it was sold again and over the years it had several owners, until the late 1880s or early 90s.  Our records differ as to the exact date but as you can observe in the picture above, it looks like the Samuel Weller family is happily established there about 1891.  In fact, Samuel or his descendants lived at 60 N. Main until 1963.  Let me tell you a little about Samuel.

Features: A water table coursing along the north and west sides of the building about 40 inches from the ground on the northwest corner is unique to the local limestone houses.  Above the windows on the façade, a rectangular stone lintel is visible on the upper story windows as well as the first floor.  Lintels and stone sills on the façade windows are all margined.  Two cellar windows pierce the north side of the building as well as two small attic windows.  The south side is unpierced.  An elevated porch runs along the west and south sides.  The covered porch with pillars shown in an 1880s photo has been removed.   The stone work in the north side of the building, facing an early street, is as well coursed as the façade.  Original wood paneling in the downstairs windows was discovered in the late 1990s.  The original fireplace, cupboard and winder stairway to the attic is along the south wall on the second floor.  Rafters in the attic are joined by tree-pins and scribe-numbered.

Owners:  Andrew Vincent, a stonemason, purchased the lot in 1831 and built the house in 1832.  Vincent was unable to make his mortgage payments and the house was ordered sold by the court.  It changed hands frequently until 1860 when Dr. William Lamme conducted his medical practice from the building.  Then Samuel Weller and his descendants occupied the house from 1891 through 1963.  Our records differ as to the exact date but as you can observe in the picture above, it looks like the Samuel Weller family is happily established there about 1891.  In fact, Samuel or his descendants lived at 60 N. Main until 1963.  Let me tell you a little about Samuel.  He was the son of John and Elizabeth Weller, born in 1826 in Washington Township, one of 11 children.  He attended school in a log building, and worked for his father on the family farm, on what is now, Bigger Lane.  In 1854, Samuel married Mary Kirby and they had 11 children also.  He was respected in the community and served as a director of the schools and as a township trustee.  Samuel loved the land and in the History of Montgomery County, Joseph Nutt writes, “Farming is his delight, at which he is a success.”  By 1880, Samuel had purchased almost 390 acres, including the farm he was raised on.  When Mary and Samuel were ready to retire, they decided to move to town.  They bought the house at 60 N. Main from Dr. William Lamme, a general practitioner who had lived there and had his practice there, for several decades.  At that time, the house had large porches on both the west and south sides. We can imagine that Samuel and Mary enjoyed sitting outside and watching friends and neighbors go by.  Samuel lived until 1908, and Mary until 1919.  They are both buried in the Washington Township Cemetery, on Maple Avenue, just a short walk from where they enjoyed living.

Other:  Stucco covering the stonework was removed in 1976 as a project for the 175th anniversary celebration of the city and township.  Now the beautiful, two story stone house with the unusual, double front doors, is being carefully restored by a new owner.  Our records show that the house has four fireplaces and it is thought that the stone came from a nearby quarry.  I wonder if they will notice the mortar between the stones, with animal hair added to it for strength?  How fortunate that the stucco, which had covered the limestone from the late 1800’s until 1976, was removed.  What a pleasure to see another building of our stone house legacy being preserved!