During the summer and early fall many of us have enjoyed stopping at the Farmer’s Market on Thursday afternoons.  It has been a busy spot and certainly increased the traffic on Maple Avenue. The produce, baked goods and flowers have been set out on large tables next to the backyard of an imposing three-story Victorian house.  Many longtime Centerville residents know that house as the Lawrence and Harriet Nutt home, even though it is now owned by the church just to the west of it.  However, you may not know that this land was once owned by Aaron Nutt, one of Centerville ’s founding fathers.  Remarkably, lots # 10 and 12 had Nutt family members living there for over 170 years.

Aaron Nutt had a dream as his family was growing.  He wanted to be able to give a portion of his land to each of his children when they married.  In our reference, “The History of Montgomery County,” we see that by 1804, Aaron paid $1.60 taxes on his land holdings of 220 acres.  His youngest son, Joseph was quoted as recalling that his “father used to take pleasure from standing on his own premises and looking at the smoke as it came from the chimneys of five of his children’s homes.”  At that time, we believe Aaron was living on the corner of East Ridgeway and Maple Avenue.  The first dwelling there was thought to be a simple log cabin.  Later, we can see in one of our photos that Joseph Nutt lived there with his wife, Elizabeth, in a two-story frame house.  When Joseph passed away in 1903, he left the corner lots to his heirs.  Then in 1908, the present Victorian style house we can see today was built.  There are references to show that Joseph’s son, Clarence Nutt and his wife, Minnie Weller Nutt occupied it.  Later, it passed to their son, Lawrence and his wife, Harriet Routsong Nutt.  They lived there very happily, with two daughters until 1970.  Lawrence was a graduate of Centerville High School and Ohio State University.  Harriet Nutt was a Centerville Elementary school teacher for many years.  Fortunately, Lawrence and Harriet’s granddaughter, Barbara wrote her recollections of visiting the house and we have a copy in our archives.

Barbara fondly remembers, “coming in the front door the first room you enter was like a family room.  To the left was a parlor where there was a piano and they used to listen to Grandma play...The next room was the dining room where they had big family dinners with covered dishes…The kitchen was across from the dining room. Upstairs were four bedrooms and a bathroom.”  Barbara also recalls going up to the attic with her cousin and playing dress-up with the old clothes that were stored there.  Happily, she ends with the thought that she and her cousins, “used to love to go to Grandpa and Grandma’s and hear about the family.”

Now, here we are in the year 2008 and the old, frame house is 100 years old.  It was purchased by the church in 1971 and is used for offices.  However, the next time you stop at the Farmer’s Market, look over and see if you can catch a glimpse of children playing in the bushes or hear laughter coming from the attic. 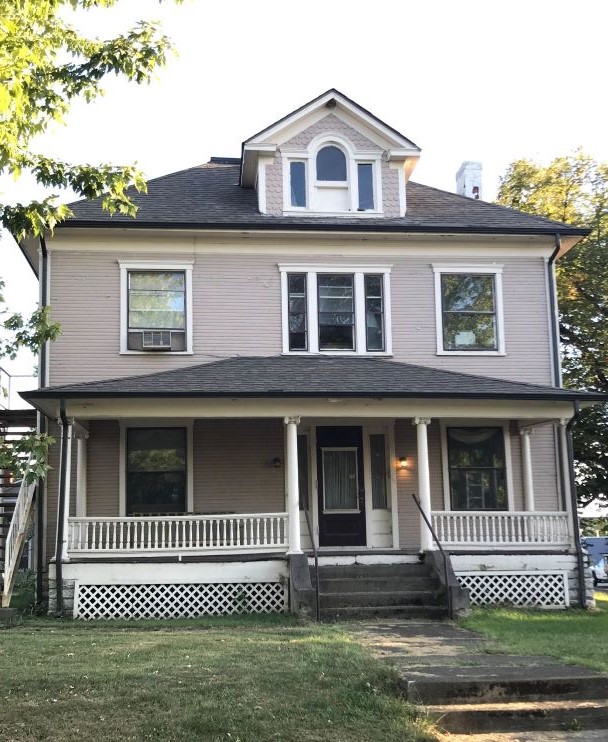