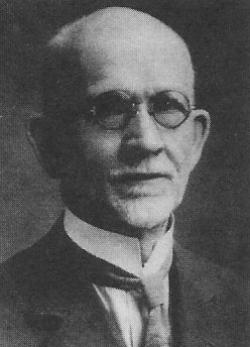 August F. Foerste was one of the foremost natural historians that the Dayton area produced. He developed an early interest in botany and geology during his youth while roaming the areas within walking distance of Dayton.  His early acquaintance with a later well-known botanist and principal of Steele High School, William B. Werthner, plus a stimulating lecture by Edward Orton, a geologist, inspired his interest and educational pursuits in geology and fossils.

After graduating from Old Central High School in 1880, he taught in [Centerville's] Schoolhouse No. 2 (Centerville Station Road) for three years.  Nearby in the area were the remains of old quarries and strata exposed along local stream beds.  Also a quarry on John Allen's property, now the Rod and Reel fishing club, provided many fossils for his collection and a chance to study the strata being exposed.  Because of his studies and collection from the Allen quarry, he identified and named the Centerville formation.  His discriminating study of what had been called the Clinton limestone revealed a new classification, the Brassfield limestone.  He also named a rock formation in the quarry sites at Dorothy Lane and Wilmington Pike as the Beavertown marl.  From these experiences he was led to specialize in Silurian paleontology and stratigraphy.  Many fossils found in the Centerville-Washington Township area were named by him including an Ordovician cephalopod, Michelinoceras, and an Ordovician brachiopod, Platystrophia ponderosa.  He attended Denison University, Granville, Ohio from 1883-1887.  While there he wrote about the fossils from the Brassfield limestone found in our local area and which he had named.

Continuing his scientific education, he earned a M.A. in 1888 from Harvard University and then two years later, a Ph.D.  He spent most of his career in Dayton as a teacher at Steele High School.  However he spent many summers working on geological surveys for both the United States and Canadian governments. After retiring from teaching in 1932, he was appointed an associate in paleontology at the U.S. National Museum (the Smithsonian) in Washington, D.C.  Foerste stayed at the Smithsonian until his death in 1936.  He is buried in Woodland Cemetery in the Dornbusch plot belonging to his sister, Martha Dornbusch.

His scientific interest back in the 1880s put our local rock formations and fossils on record for all to study.  An award is given by the Dayton Museum of Natural History in August F. Foerste's name each year.