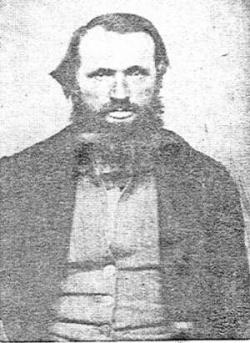 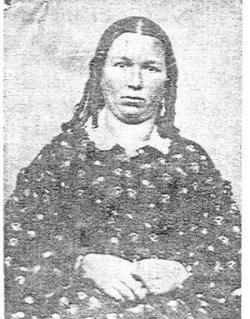 Henry and his parents and siblings were living in Wayne County, New York when the Revolutionary War broke out in 1775.  Like most of their neighbors in New York State, they were inclined to ignore the conflict.  Although they were concerned about nearby Indian raids, they had always enjoyed good relations with the tribes and often had feasted with them at their table.

With hostilities heating up in 1778, the Stansels left their farms and moved to a settlement a few miles away.  From time to time, the boys returned to the farms to take care of the livestock.  Henry, then thirteen years old, accompanied his brothers William, Nicholas and George, and an old man who worked for the Stansels, on one of these feeding trips.  When the four boys were driving the cattle towards the barn, they discovered a number of Indians trotting toward them from out of the surrounding woods.  The boys immediately began running toward the settlement as fast as they could run, but the nearest Indian shot and scalped William.  Nicholas and George, apparently the fastest of the boys, made their way to their horses and quickly returned to the protection of the settlement.

Slightly handicapped by an injured foot, Henry was put at a greater disadvantage when he had to cross a creek and his shoes filled with water.  This so slowed his running that the Indians caught up with him and made him their prisoner.  They also caught the old man, but after compelling him to round up the horses, they allowed him to go free.

Among the Indians who captured Henry were some who had partaken of his father's hospitality on numerous occasions.  The boy tried to reestablish his friendship with them but they treated him severely.  His clothes were stripped off and he was forced to run through the trees while trying to keep up with the Indians riding the captured horses.  As they made their way through the forest, the party was joined at various points by other groups of Indians who also had white prisoners with them.

At night the Indians secured Henry with a throng of rawhide tied to each wrist and ankle and then tied either to a tree or a stake driven deep in the ground.  The first night they flashed the gory scalp of his brother in front of his horrified eyes.  Later, he was forced to carry it on their continuing journey through the wilderness.  As though this was not enough torture, when they arrived at an Indian village, all the prisoners were forced to run the gauntlet; and this was repeated in every village on their path.

Tortured by the Indians

To form the gauntlet, the Indians, male and female, lined up in a double row.  From the smallest child to the oldest crone, they were armed with switches, thorn bushes, rawhide strips, sticks and clubs.  The captives, stripped of all clothing, even their shoes or moccasins, were forced to run between the two lines of screaming savages who struck at them, not overlooking any exposed area of their bodies.  If anyone fell, he was sure to be severely beaten.

As the trip progressed, the Indians began to show some partiality towards Henry, easing their mistreatment of him.  While the captives were beaten without mercy during the gauntlet torture, it became evident that the young boy was not treated as roughly as the others.  His show of courage for one so young, gained their admiration.  Still, in his later years, his back bore the scars of the inhuman treatment to which he had been subjected.

Once arrived at their destination, Henry was given to an old squaw who had lost her son.  The old woman took good care of Henry, tending his wounds and seeing that he was properly fed.  In time, he fit himself into the routine of the camp, becoming just another Indian in every respect except the color of his skin and eyes.  He was taught the beliefs and customs of his captors, and the history and culture of the tribe.  He was exposed to the religious teachings of the Indians, which centered around Moneta, the Supreme Being.  Young Stansel hunted and fished with the other young braves and participated in their games.

This life continued for several years until his foster mother was shot and critically wounded in a drunken frolic.  The poor woman crawled into the bushes and died.  Henry was then raffled off and fell into the hands of an old brave.  Kept as a slave, the boy still was treated reasonably well.  This continued for two more years as the Indians traveled through Ohio and Kentucky until the tribe encamped in the neighborhood of a British fort on Lake Ontario.  Paying his English friends a visit, the old brave drank entirely too much "firewater" and ended up bartering off young Stansel for a mere trifle.

Henry was delivered to the British officer, and the Indian departed after securing his pay.  It was only then that the boy learned that the War of the Revolution had ended.  Sobering up the next day, the old Indian requested that young Stansel be returned.  The British officer had secreted Henry in the fort under some saddles and he told the old man that his "slave" had already left.

The Return to His Home

An exchange was soon arranged for Henry, and, properly attired, he was sent home to rejoin his family after the absence of five years.  Even though dressed in conventional clothing, young Stansel still looked like an Indian.  His appearance had changed so much during this captivity, that none of his family or friends recognized him.  His family had given him up for dead.

Arrived home, he asked his mother for a drink of water.  As they conversed, he asked his mother about her family and she told him all about the death of one son at the hands of Indians and the capture of another.  Pushing back his cap to reveal an early boyhood scar on his forehead, Henry said, "Don't you recognize me, Mother?"

Unfortunately, the happy family reunion did not last very long.  William and Elizabeth Stansel were very devout members of the Catholic Church.  Exposed for five years to the religious teachings of the Indians, Henry found that he could no longer accept all the precepts of the Catholic Church, and he turned toward a Protestant religion which he thought more closely paralleled the teachings of the Indians.  This led to some very acrimonious arguments with his parents and finally to a complete break with his family.

Still a very young man, Henry left his father's house once more, never to return.  His wanderings led him out of New York State through the wilderness to areas made familiar to him in his travels with the Indians, and then finally into Kentucky.  Here he became an intimate of both Daniel Boone and Simon Kenton, traveling with them on hunting expeditions and forays against the Indians.  Eventually he settled near Lexington, becoming a landowner of some consequence.

On April 3, 1793, Henry married Elizabeth Allen in Maysville, Kentucky.  Elizabeth had been born in Culpepper County, Virginia on August 24, 1774.  Three daughters and two sons were born to this couple while they resided in Kentucky.  However, in his travels into Ohio, Henry had become enchanted with the lush land north of the Ohio River.

The Farm on Sheehan Road

In 1801, Henry Stansel selected 200 acres of land along the present Sheehan Road near the Warren County line.  He cleared a corn patch and built a log cabin.  In the summer of 1802, he brought his family, along with Elizabeth's brother, Jerry, to their new home.  They brought three horses, one chicken and a few geese, and an unbelievable amount of household goods, considering the limited amount of transportation available.  Elizabeth rode a horse, carrying a four month old baby in one arm while controlling the horse with the other.  Henry and Jerry, with one child each behind and one in front of them, rode the other horses which also carried their cooking utensils, guns, farm equipment, and other bedding and provisions for the journey.  The chicken rode on one of the horses, but the geese had to walk.  In Cincinnati, one of them wandered away to become lost on the streets.  It was joyous occasion when the family caught up with it on their way out of town.

The Stansels were successful farmers and pillars of the community in Washington Township.  They had eleven children in all.  Elizabeth passed away on September 21, 1833 and Henry a few weeks later on November 1.  They are buried in the old Sugar Creek Cemetery.

Taken from Pieces of the Past - Early Centerville/Washington Township History by Howard R. Houser, The Centerville Historical Society, 1994