Enos Doolittle and his Tavern

The story of Enos Doolittle and his tavern is one of success and tragedy.  As we read our local history, we learn about the Doolittle Tavern that was located where the present Town Hall sits.  According to Beers 1882 History of Montgomery County, it was the most famous tavern in the township and was known as the best place to stop west of the Alleghenies.  But who was Enos Doolittle, the proprietor?

Enos Doolittle, a Yankee peddler, arrived in Centerville in 1820.  We have no records that tell us when or where he was born or who his parents were.  He immediately rented a building and opened a dry goods store.  Two years later, he purchased Lot 14 and 18 on the south side of Cross Street (now Franklin Street) for $300.  In October of that year he married 16-year-old Bathsheba Robbins.  She was the youngest daughter of Benjamin and Bathsheba Nutt Robbins, first settlers in Centerville.

In September 1823, Enos purchased Lot 26 for $400, erected a two-story stone building and opened a tavern.  The Doolittle Tavern was very successful and busy with guests from out of town, so Enos decided to expand.  He created an inn for travelers by using the upstairs of the tavern for sleeping quarters.  He built a stable in the back for the visitor’s horses.  He added a one-story stone addition to the south and called it the Bur Room.  It contained a large table for his guests to dine on.  And when the table was pushed aside, it was a good place to hold dances and other social events.  In front stood a large signpost with a picture of a rising sun and the words “The Sun Shines for All.”

Gradually, however, his good life changed.  In May 1835, Enos and Bathsheba’s daughter, Mary, died at age fifteen months.  In October 1840, their sixteen-month-old daughter, Roxanna, died.  In February 1841, Enos was appointed postmaster of Centerville, but shortly afterward he suffered a debilitating stroke.  However, he was still able to run the tavern and serve as postmaster.  In January 1845, a son William was born.  In February, one month later, his wife Bathsheba died at the age of thirty-nine, and in April of that same year, William died at three months of age.  Enos closed the tavern and he and a daughter moved to Columbus, Ohio.

In 1908, suffering from neglect, the Doolittle Tavern was torn down.  A new Town Hall was erected, keeping Lot 26 a community center.  A letter written by Enos’ daughter, Mrs. Bancroft of Columbus, was read at the new Town Hall dedication in 1909.

“Being a child in early teens when my home was broken up, I cannot remember much of the town’s early history, yet I have with me the sweet memory of my good father’s cordial welcome to all.  He was afflicted with paralysis.  The unpretentious inn was known far and wide as a veritable traveler’s rest.  Many celebrities among whom I remember William H. Harrison, Thomas Corwin and Henry Clay rested there.  Harrison spent the night of September 9, 1840 in our home.  Next morning was all bustle and excitement.  It seemed everyone was going to the Whig Convention to be held in Dayton the next day.  In 1843, Henry Clay with a colored servant, a novelty in Centerville at that time, spent the night with us…. I felt quite honored because I had a hearty handshake of these famous men, and very likely gloated over it childlike, you know.  Before the days of the railroads, many people traveled in the private conveyances and found comfort in our simple home.”

Enos and Bathsheba also had four “charming” daughters that lived – Amelia, Philena, Harriet and Eugenia.  The Doolittles and their tavern affected many people.  The traveler appreciated a place for a rest and a good meal.  The townsfolk enjoyed a place to socialize and the excitement of out-of-town visitors.  They influenced both the people at the time and the history of Centerville and Washington Township.

Taken from Pieces of the Past by Howard R. Houser and Society archives. 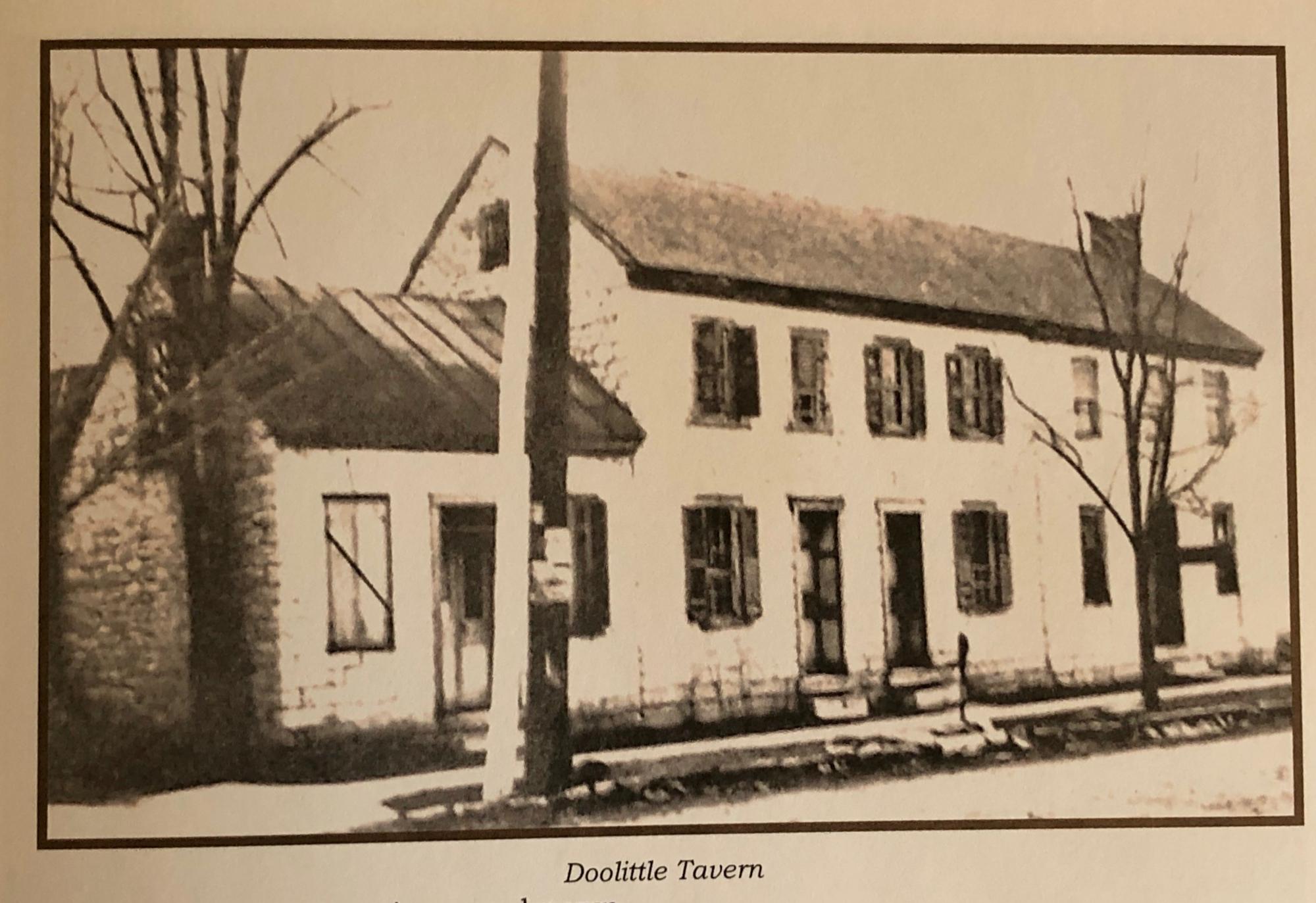