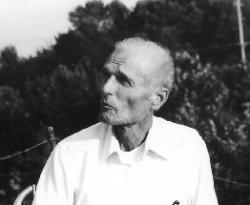 ..."one that has experienced the bitterest of life's bitters, enables you to appreciate the sweetest of life's sweets." 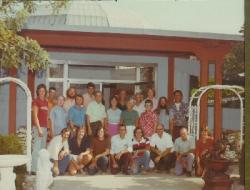 Tom is in the first row standing, fourth from the left. 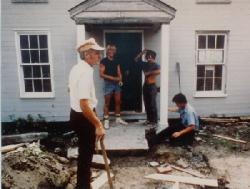 Tom Stolz (standing in foreground) and volunteers help with stone path in front of Asahel Wright House during the 1970s restoration of 26 N. Main St.  He received many recognitions for his volunteer work.

Tom Stolz was a landscaper in Washington Township and Springboro with an unconventional habit of giving away his land for recreational use.  He used his creativity and his time and money to create outstanding parks for the community.  He has been described as a visionary and community spirited.  Others have called him eccentric and strange.  He was not offended by the latter and said, "they are usually sitting behind a desk in the artificially created environment of an office."  He described himself as "practical, versatile, and a naturalist."

When Tom was sixteen years old he became bedridden with an ulcerated colon and was forced to finish his high school education through correspondence.  He was told by his doctors that the only way to survive was to have a large portion of his diseased large intestine removed.  Instead he went to a Missouri Clinic that specialized in a nutritional approach to healing.  He became an amateur nutritionist and that started a plan to be a biochemist.  He struggled to overcome his illness with good nutrition and hard work, and felt that his struggle helped to contribute to a broader outlook on life.

He studied biochemistry at the University of Arizona from 1951 to 1957.  His family owned land at the northeast corner of McEwen Road and Route 725.  His plan was to transform this flat, treeless meadow into an organic farm and private laboratory and to pursue independent research in biochemistry and nutrition.

In 1960, unable to pursue his independent research or to find work in his field, he created the family-operated business, Countryside Nursery, which by the mid-70s employed 35 people.  He also owned 160 acres of nursery land in Springboro and 5 greenhouses on Ridge Avenue in Dayton.

Tom was a Philanthropist.  He said that philanthropy is a way that a "very ordinary person can be more than a statistic."   "Wealth does not develop people, struggle develops people."

In 1977, he found himself overextended due to his donation of plants and his charitable landscaping for community projects and was forced to auction his business and sell some of his land.  It was at this time that he pointed his life in a different direction.

He began by donating 8.5 acres of his land at the corner of McEwen Road and Route 725 to the Centerville YMCA, which did not have a home.  It became the South Suburban YMCA.

"The YMCA is a logical trustee of the property.  There is little opportunity in our economic structure to preserve natural beauty, it's more desirable to save a site than to earn that reward from the sellout.  It made the going out of business not a psychological setback but an inspirational goal."

He also organized and led the fund drive to raise 2.5 million dollars for the building.  Countryside Park was created as he donated and planted hundreds of trees and built a shelter, ball fields, docks and ornamental bridges, over two miles of limestone trails, and ponds.   The YMCA closed and the building was taken over by the township in 1988 and the Washington Township Rec Center was created.  He sold his remaining land to a car dealership, settled his debts, and continued his park work.

Tom also took the Leonard E. Stubbs Memorial Park and put his magic to work.  It is now a large community park complete with amphitheater, Veteran's Memorial, trails, ponds, bridges, playgrounds and picnic areas.  Tom said that Stubbs Park was an "almost unrestrained opportunity for creativity and I'm a creative person.  When there's a significant need in the community that I can help fill, it gives it all the rhyme and reason"

The last 16 years of his life was devoted to donating land, trees, time, and money towards preserving green space and creating parks.  Using his own resources, Tom built shelters, ball fields, and docks.  He planted over 2500 trees, laid miles of limestone trails, dug 9 ponds, built 34 ornamental bridges, ball diamonds, and an amphitheater.