"Don't get worried, get busy."

Ida Weller was probably the most influential woman ever to live in Centerville and Washington Township.  As a woman, she was way ahead of her time.  Her own intellectual curiosity, energy, and persuasive powers did much to promote education and culture in the then rural community

She was born in 1876 as Ida Evaline Albrecht, later changed to Albright.  Her father's farm stood where Bethany Lutheran Village is now.  She graduated in 1893 from the old Washington Township high school on West Franklin Street, now a restaurant.  Her attendance for one year of normal school at Ohio Northern college earned her a teaching certificate in 1895.  From 1895 to 1897 she taught in Schoolhouse Number 8 at the corner of McEwen Road and State Route 725.  She married Arthur S. Weller in 1897 and they farmed 130 acres on Clyo Road.  Her three children, Robert, Samuel, and Margaret, did not keep her from following her many interests.  She painted china, photographed and developed her own pictures, made pen and ink drawings as well as watercolor pictures, helped her husband on the farm, raised prize chickens, and had a beautiful flower garden.  All the while she read volumes of books on a variety of subjects.  She always said, "I like to study, study, study...I can never get enough of it."

In 1900, she was instrumental in helping to organize a Library Club and she instigated activities to raise funds to buy books.  Her original plays, in which she also acted, took place on the Township Hall stage.

She organized the first poultry club in Montgomery County in  1917.  Her work with the Ohio State Extension Service and on 4-H exhibits and her patriotic efforts in support of the successful Victory Liberty Loan Drive during World War I earned her a citation of recognition from the government in 1919.

In 1922, she was a speaker for the Farmer's Institute and traveled around Ohio as a lecturer.  One of her topics was "Get a Good Grip and Hold On."  The program described her as, "A farm woman with a message who has gathered much along life's way.  Her success in solving life's problems is not limited by the walls of her home.  She makes time for all sorts of community service."

To raise money for one of her projects, she persuaded a Dayton movie theater to give her 200 advance tickets to the silent movie, "The Old Homestead."  In return for the tickets, she promised publicity for the opening of the movie.  Crowds and the newspapers were on hand when 200 farmers from Centerville arrived driving horse-and-buggy and farm wagons.  It was quite a sight.  Ida had charged the farmers one dollar for the tickets thus raising money for a community project.

Her literary efforts were remarkable.  She wrote articles for the Farm Bureau, won an essay contest sponsored by the American Farm Bureau, and received a merit award from True Story Magazine for one of her stories.

In 1924, the Ohio Grange awarded her a Degree of Flora for her expertise with flowers.  Ida organized a Community Garden Club in the 1930s and the first annual flower show was held in September 1937 in the Township Hall.

During the Depression, she organized a canning campaign.  After canvassing neighboring farms for surplus vegetables and fruits, the food was canned and distributed to nearby communities.

Never satisfied with her own knowledge, she entered a degree program at the University of Dayton and received a Bachelor of Science in Education in 1932.  Neighbors scoffed at this middle aged woman who was still getting educated.  She was 56. 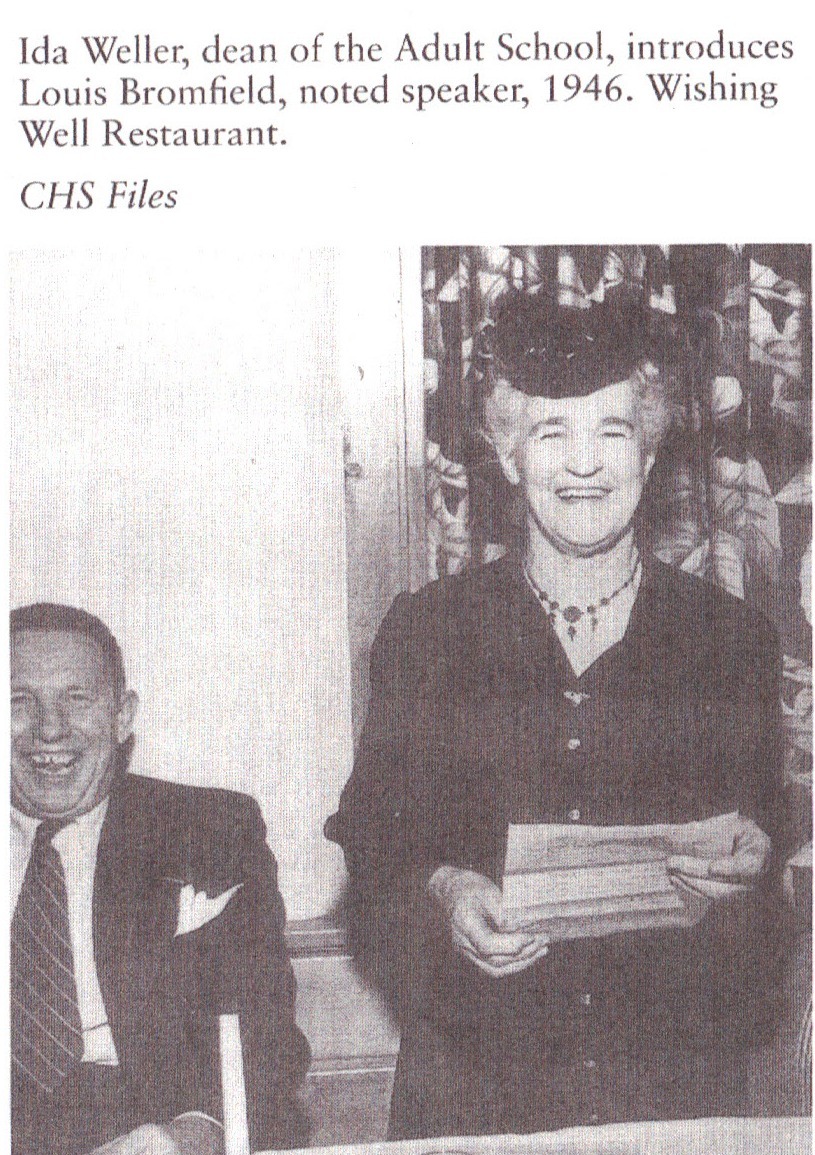 Perhaps her greatest effort and certainly her favorite project was the establishment of the Adult School in 1933.  She reasoned that during the winter months rural people had more hours of leisure.  Also, it was the depths of the Great Depression and people were thinking about the pressing social and economic changes in the country.  Ida wrote letters and traveled to obtain quality speakers; crafts and entertainment added variety at the Adult School.  Tuition for a family was one dollar.  She had socialists and doctors and farm experts as speakers, and even Louis Bromfield of Malabar Farm came to speak at an Adult School dinner held in 1946 at the Wishing Well Restaurant (the old Centerville High School).  It took many letters to persuade Bromfield to come to our little farm community.  He was a famous lecturer, conservationist, and author.

Her committee's appeal to the community to join the Adult School proclaimed, "We feel it is a moral duty, yours and mine, to become informed."  During the 1930s she had a radio program in which she interviewed rural people.  She tried to give dignity to the role of the farmer.

Being musical herself, and always one to enjoy singing and playing her mandolin, she organized the Centerville Women's Chorus.  They were much in demand and sang all over southwest Ohio.

During World War II, the idea of promoting Victory Gardens was taken over by Ida.  She supervised the setting up of a real live garden in the big display windows of Rike's Department Store at Second and Main Streets in Dayton.

In 1947, she and Arthur celebrated their 50th wedding anniversary.  "Cap," as she nicknamed him, and "Spike," as he called her, had a saying that spelled out their philosophy of life together, "We both live the sod and the sweet perfume of sprouting grass; we like farm life.  None but the loving souls are fit for the study of nature."  Arthur died in 1950 and Ida passed away two years later.

Many times during her lifetime she was the object of criticism, whether it was her old-fashioned style show to raise funds, or the men's pants she wore for farm work, or the socialist and birth control speakers at the Adult School, or the persistence she exhibited to attain her goals.  Whatever it was, she did make a remarkable lasting impact on her community.

Township Trustee Ethel Winterhalter, in 1959, recommended to the school board that the new elementary school on Sheehan Road be named for Ida Weller.  Her nomination stated that, "In all her educational activities, Mrs. Weller aimed at quality.  She refused to tolerate snobbery or the arbitrary in education."