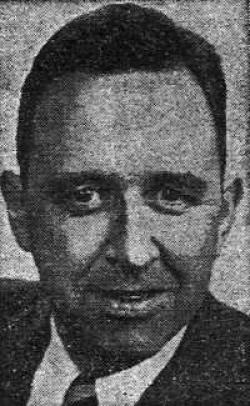 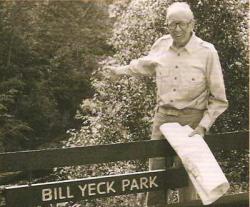 "Father of the Park District"

Open space, peaceful streams, and untouched woods, all being available to kids to explore and discover nature was important to  William (Bill) Yeck, founder and chief architect of the Centerville-Washington Park District (cwpd.org).

He grew up in such surroundings in Akron, Ohio in the 1920s.  His home was within three blocks of an oversize vacant lot and neighborhood park, and it sat on the edge of the Cuyahoga Valley, a gigantic nature park where he hiked and camped.  His years as a Boy Scout and a leader gave him not only a great amount of experience camping and exploring the outdoor world, but it instilled in him a sense of obligation to contribute to his community in the form of personal service.

Bill moved to Washington Township in 1951 and found a beautifully natural, rural community.   Residential development began to move in with no zoning plan in place.  Bill and the residents had the common vision of the preservation of green space.  He was willing to lead the community in that quest and they were definitely behind him.

A natural leader, he enjoyed working with others to discover new ways to save open space using new and untried methods, while basing those actions on research and thought.  And he constantly thanked not only the people he worked with but the residents of the community who continued to approve the levies the Park District put forth.  He applauded their vision and their efforts.

Bill's personal interests tended more toward the wonders of nature and the preservation of woods, lakes, meadows, and streams, but he put a great amount of effort into the development of the neighborhood and community parks.

Bill called himself a "promoter" and a "dreamer" but also realized that it took more.  He changed laws, developed zoning ordinances, and worked diligently to inspire others in the preservation of green space for future generations.

In 1984, the Centerville-Washington Park District was set to celebrate their Silver Anniversary.  An anniversary recognition program was planned and Bill Yeck issued an invitation to all those who helped build the Park District asking them to attend so they could be recognized and receive thanks.

Arthur E. Moyer was one of the original three men appointed to the Park Commission in 1959.  He resigned when his job transferred him to Europe for two years, and Bill replaced him on the board.  Arthur thought it was ironic that Bill issued the invitation and wrote this letter which was published on the 'Opinion' page of the Centerville-Bellbrook Times on October 13, 1984.

Arthur Moyer wrote:  "On Oct. 6 The Times reported that the Centerville-Washington Park District will have a silver anniversary recognition program at Grant Park at 11 a.m. on Oct.17.  The same issue of The Times published a letter inviting all those who helped build the Park District, particularly in the early years when the going was tough, to attend the Oct. 17 program so that they can be recognized and receive thanks.  That invitation was signed by William S. Yeck as Secretary of the Board of Park Commissioners.

I think its great that the Park District management wants to recognize and thank all those who helped do the superb job which was done.  I'm all for that.  But, ironically, the one person undoubtedly most deserving of public recognition and thanks for the job is that same William S. Yeck who is now inviting us to be recognized and thanked.

To explain my feelings about Bill Yeck a bit of history is in order.  The Park District was started in 1959 because we knew we would need more parks in the Centerville-Washington Township area, and we knew that they could not be funded solely by private donations.  That source of funds had been exhausted when we bought the Activity Center.  So when Bill agreed to head up the newly formed Park District in mid-1959 he had a broad charter: "Get us more parks and find ways to pay for them."

In those days the going was tough.  A state law permitted only one public park per township.  Nobody knew how many or what kind of parks we would need or where they should be located.  No one knew how they should be operated and maintained.  There were no funds available.  Very few in the community even knew that the Park District existed.

They say when the going gets tough the tough get going.  Bill got going, hit the books, visited other park districts, enlisted the aid of experts and enthusiasts and solved the problems, one by one.  It would take volumes to tell the full story.  The result is what must be one of the finest suburban park districts in the state.

Now Bill and the other commissioners want to recognize and thank the many people who helped with the job.  Fine.  They did much fine work and they deserve to be recognized and thanked.  But, on behalf of all of us who shared the original dream and on behalf of all the past, present and future generations of Park District users our reply must be: "Bill Yeck, you are the one who made it work.  Your community is eternally in your debt.  Oct. 17 must primarily be Bill Yeck Recognition Day."

During Bill's reign on the park board, the Park District grew to 43 parks with 893 acres of open space preserved for generations to enjoy.  Bill was so dedicated to the open space concept that he put a conservation easement on his home property so the woods surrounding the house will be preserved forever and no development can ever occur.

1956-57 - Organizer and Promotion Chairman - Committee of 100 for Washington Township Zoning.

2008 - Inducted posthumously into the Ohio Parks and Recreation Association Hall of Fame.